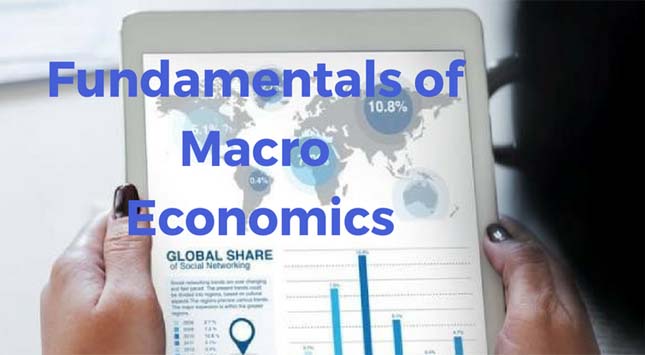 Economics is the field that studies the production, distribution, and consumption of goods and services. This may be on a global, regional, or individual perspective.

Many economists have attempted to define the scope of macroeconomics. P. A. Samuelson defined macroeconomics as “The study of the behavior of the economy as a whole.

However, these definitions do not encompass the entire ambit of macroeconomics. A more cohesive definition can be found on Investopedia, which states that “Macroeconomics is a branch of economics that studies how the aggregate economy behaves.

In macroeconomics, a variety of economy-wide phenomena are thoroughly examined such as inflation, price levels, rate of growth, national income, gross domestic product (GDP), and changes in unemployment.”

Simply put, macroeconomics looks at economics on a global or national level.

You May Read: 6 Factors to Know Before Investing in Mutual Funds

One of the basic concepts in macroeconomics is that income and output. Everything a country produces in a given period of time is termed the Gross Domestic Product (GDP) or the national output. As everything that is produced and sold generates an equal amount of income, the GDP or output is often equated with the total income or the sum of all value added in the economy for a defined period of time.

GDP is one of the measures used by economists to understand market swings and changes. One indicator commonly used is the output gap which is the difference between the actual output of an economy and the maximum potential output of the economy. The output gap is normally expressed as a percentage of GDP.

Other factors like human capital advances in technology, accumulation of machinery, and education too affect the GDP. Economists look for macroeconomic policies that prevent economies from slipping into recessions and also policies that lead to faster long-term growth.

You May Read: Important Financing Concepts You Didn’t Learn in School

Inflation and deflation are much talked about topics in macroeconomics. Large changes in either direction are undesirable. Inflationary economic conditions occur when there is an increase in the price of goods and services across an economy while deflationary environments are those where the economy of a nation declines. Economists need to understand the driving factors behind these environments in order to recommend appropriate measures to governments in order to curb adversity.

Unemployment in an economy is measured as the unemployment rate i.e. the percentage of workers without jobs. It is normally measured by the following equation:

Unemployment can be categorized as classical, frictional, cyclical, or structural depending on the causes behind unemployment rates.

The two main policies used by governments to stabilize national economies are Monetary and Fiscal Policies.

Fiscal policies are implemented by governments using revenue and expenditure as instruments to influence the economy. Government policies on taxes, expenditure, and debt are all examples of fiscal policy measures.

You May Read: How to Enjoy a Trip Abroad Without Spending a Fortune

As you can see, macroeconomics is an extremely broad field that has an impact on economies on global and national scales. Studying such a broad field requires a certain amount of dedication and instruction from knowledgeable professionals or experts.

You can learn macroeconomics as part of formal education in commerce or economics from colleges. If you have already completed college or if you’re working and want to study macroeconomics at your own pace, you can explore online courses in macroeconomics developed by experts in banking and finance that encourage interactive education. Happy learning!

Also, Check out the Write for us section if you want to send us content.

What are Fund of Funds (FoF)?

How Mutual Funds are Taxed

All Stocks are Under Quarantine, What Should Mutual Funds Investors Do?