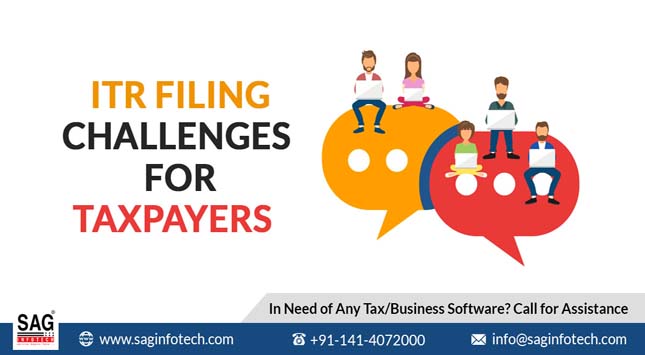 Every taxpayer is required to file an accurate Income Tax Return (ITR) so that the correct amount of data can be collected by the Income Tax Department and contributed to the government revenue.

The process of filing an accurate ITR is not that simple and demands the presence of mind & adherence to the norms & guidelines set by the Tax Department. Any errors or faults that occurred out of negligence may result in the imposition of hefty fines or penalties on the taxpayer.

Here Is a List of Common Challenges an Assessee Face While Filing an ITR:

Challenge#1 Selection of a Correct ITR:

Among the availability of seven different ITRs, choosing the correct one based on the nature and source of income is one of the challenges faced by the taxpayer as each form has its clause. In general, ITR-1 is relevant for salaried individuals whose main source of income is salary, however, there are some eligibility conditions that make e-filing ITR-1 for FY 2022-23 irrelevant for a salaried individual.

So, selecting the correct ITR form is one of the challenges for taxpayers.

Section 80C of the Income Tax Act gives the right to claim deductions up to 1.5 Lakhs from income to a taxpayer in a particular fiscal year. But due to a lack of awareness & expertise, many taxpayers are unable to claim their deductions from income.

In the same way, an amount paid in an insurance policy can also be claimed u/s 80D. There are many other deductions available u/s 80 that a taxpayer may not know.

Lack of knowledge about claiming different deductions is another challenge a taxpayer’s faces.

Computation of taxable income from different sources is one of the challenges faced by the Taxpayer.

Note: TDS is deductible not only from the salary but also from the fixed deposits.

A taxpayer needs to submit the required documents to the HR dept. to avail of the HRA tax relief.

For example: If you are accommodating in a rented home and paying an annual rent of more than 1 Lakh then you become eligible to claim HRA tax relief. But for that, you will need to submit the rent agreement, rent receipts, and PAN of the house owner to the HR department of your company.

Challenge#5 When an Employee Fails to Submit Tax Evidence to the Employer:

A taxpayer must ensure that he/she has duly and timely submitted his/her tax declaration along with all the necessary documents to his/her employer. All the tax proofs, a taxpayer needs to submit are mentioned in Form 16s, which can be claimed during e-filing.

If you fail to submit tax evidence to your employer on time, you may get restricted from claiming exemptions or tax benefits from your salary income.

Challenge#6 More than One 16s Form

This challenge is encountered by the employee who switches his workplace or company in a particular fiscal year. In such a case, an employer needs Form 16s from the current employer as well as from the previous employer. Holding more than 16s form, sometimes becomes challenging for the taxpayer.

When the tax liability of a taxpayer is more than Rs. 10,000 in a fiscal year, then they are required to pay advance taxes for that particular fiscal year. Advance taxes can be leviable to the businessman, salaried individual, or freelancer; depending on some conditions.

Advance taxes have to be paid by the assessees in quarterly installments:

Challenge#8 Not Remembering the Login Credentials

A taxpayer may forget the login ID and password and there are higher chances of that because the account is used once a year. Password recovery is a time-taking task. Moreover, if the taxpayer is utterly dependent on his CA for filing ITR but now that CA is not catering his services to that taxpayer then this becomes a challenge for a taxpayer. So, a taxpayer must keep the password and other login credentials secure & safe with him.

ITR filing isn’t a last-minute job as it demands complete attention and awareness. If you leave this task for the last moment, there is a higher possibility that you will file an incorrect ITR which will lead to its rejection by the income tax debt. and unfortunately, you will have to refile the correct ITR. The penalty will be imposed on you for delayed filing of income tax returns via Gen IT Software.

How to Prepare for an IRS Tax Audit

How to Be Your Own Bookkeeper: Accounting Basics for Small Businesses